My younger brother, after what must have been some deep thought processes, txt me at 4am one Sunday morning and said ‘Let’s do the Grunt’. He’s always been the sporty Broughty, I’m more decorative, and I like to think I’m the smart one. I demonstrated this intelligence by challenging my 90kg, 1.85m fit-for-life little brother to this race. ‘Loser buys dinner he said. And drinks.’ It takes a fair bit of food and drink to fuel Willy, and not being a fan of foliage I knew losing to him meant paying for one, perhaps two steaks and quite a lot of the amber liquid. I was not going to let him have this easily. 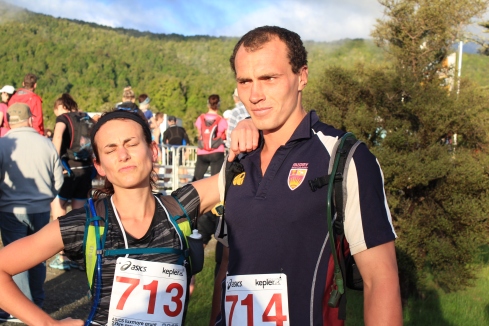 Entries to the Kepler Challenge and Luxmore Grunt open at 6.30am on the 6th of July, five months out from the actual race. It sells out within a few minutes so if you don’t get your ass out of bed at 6am that morning, you aren’t going to get a place. With the help of Ewa from WoRM I managed to get an entry to the Grunt, and William made the wait list.

GOALS FOR THIS RACE

For the next five months my sole focus was this event, I had to learn how to run on trails rather than road. Despite being surrounded by hills I didn’t even know where I could run. Going from flat to hills, and tarmac to tree roots and mud was a big challenge for me, and it hurt in almost every place imaginable.

The weekend of the race Willy had none of the required kit except for shoes. Casual as. ‘Have you trained William?’

Twas the night before Kepler

‘Yeah, nah. I went for ten runs.’ If I base this figure on exaggerations of my own training, he went for three runs.

On race day at 6.30am I met my family at the control gates, warmed up a little then went to the start line to make intimidating faces at the other runners. My plan was to run the first flat 5-6km at a 4.45 pace because this is what I settle in to on a long run, run and walk up the hill to save a bit of energy, come down the hill fast then hold 5min kms until the end.

The first part went to plan, Louisa Andrew was so fast and disappeared in to the trees very quickly. My legs were so fresh they felt like jelly, after training on sore legs so much it was like I had no feeling in them at all. That would come later, don’t worry. I walked and ran up the hill and the guys around me told me I was second female, I was pretty stoked but still annoyed at myself for not being able to keep running up that hill, and Melissa Clarke passed me at about half way.

It was a a mental challenge going up the hill but as soon as I got above the bush line and out in to the open it was like the race really started. The leading runners were just starting to pass me on their way back down and seeing them flying down the hill was a huge motivation. The views at this part of the track are epic but I didn’t stop to look. At the aid station at Luxmore Hut (half way point) they told me I was two minutes behind second. The board walk at this point is too narrow to comfortably fit two runners passing each other, so I just ran at people with the aim of them knowing that we both needed to turn side on at the right moment to pass safely. It worked for the most part.

William was coming up the hill now and wasn’t far behind me, I was hitting two out of four goals at this stage so I decided I should fall over to give myself a new challenge. I tripped and fell gracefully on to the gravel, like a feather duvet blanketing a litter of fluffy kittens, breaking nothing and only managing to graze my hands, legs, stomach, shoulders and elbows and hit my head. Now I felt meaner and looked meaner, so I had to start running meaner.

It was so great on the downhill passing people coming up and hearing them cheer you on. Positivity and smiles were directly proportional to how far up the hill people were, the further down I got, the less well received my ‘keep going’s and other generic running chats were. Toothy grins were replaced by half-assed smiles, then one raised eyebrow; and eventually a look of desolation, pain and terror.

It got nice and quiet running through the bush on the down hill, I like to think I look like a stallion charging down the trail, wind in my mane, powerful legs thundering along. Alas I think it was more of a new born foal sort of run. I caught up with Melissa about ¾ of the way down and galloped past. If I could have given myself a high five a this point I would have, it was a great feeling.

I saw my friend Samdup just as we hit the flat and this is when my legs really woke up. They say it hurts when you get off the hill and they aren’t lying! He egged me on and told me to keep up with him and it just wasn’t happening. My Garmin also said I had run 18km rather than 21km which was a little demoralising. 5min kms went to 6min kms and there was no end in sight. You can hear the loud speaker on the wind at points but the trees hide everything and it 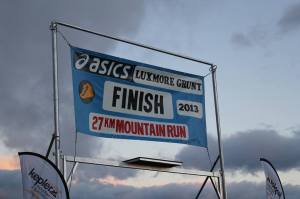 I ran clear of the trees near the finish and some local kids gave me hi-fives, lucky I don’t wipe my nose with my hand when I run, right? Right. It was so good to see Ben, Mum, Dad, and Ben’s hairy friends at the finish line all cheering for me. They gave me hugs me at the finish with congratulatory stinging patting on the back in the places I had no skin left after my pack had chaffed it off.  I came in 20th place overall, and second female with a time of 2.34.17, Willy got 3.01.30 and 60th overall, see the rest of the results here.

The big highlight for me in running this race was seeing so many people I knew cross the finish line and achieve something great. I am so proud of my brother for running 27km up and down a mountain with hardly any training, and even more impressed that he wants to enter again next year. 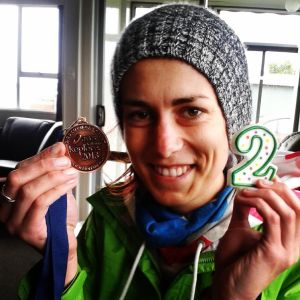 To recap on my goals;

*** I forgot to mention, Willy made no dinner purchases that night. Mum and Dad came to the party and bought me dinner at Te Anau’s best restaurant The Redcliff Cafe. The incredibly good looking and musically talented owner Megan with the help of Gemma sung ‘We are the Champions’ to me when they brought out my food! 🙂