You are entered in the 2014 Vibram Tarawera Ultramarathon. You are awesome.

‘Today is your last chance to enter the Vibram Tarawera Ultramarathon at the early bird rate!’

I read the disclaimer and was pacing the office feeling really nauseous, muscle necrosis? Renal failure? Helicopter rides sounded fun though, and even if it was a $1000 ride with a broken limb, there was a small chance I would be conscious and the weather would be clear enough to get a great view over the lakes while hallucinating. Not wanting to miss out on what was obviously a bargain, I got out my credit card and clicked ‘Enter’.

Training for this event went fairly smoothly, there just wasn’t enough of it.

I defaulted to doing my favourite trails and hills, lots of speed and elevation but no real longer runs. My longest was 3.5 hours, and while I did quite a few 30-34km runs it didn’t prepare me for what lay ahead. I sprained my ankle which caused a few issues but I was really good at letting it heal. I did learn a few valuable lessons through training that I took with me to the race though, the first being that when you run a lot and are burning thousands of calories, you get a wee bit peckish, and you hit walls. 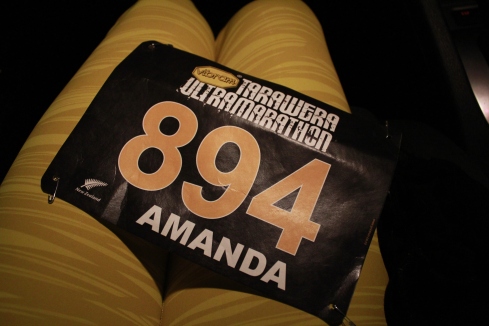 My favourite piece of kit

From previous inner thigh massacres on long runs I steered well clear of shorts. I usually only wear a crop top because my arms chafe (too muscular they say) but when choosing between that and losing all the skin from my lower back like I did during the Grunt, I chose armpit chafe. My race plan was to cruise through 60km, listen to some Fat Freddy’s, admire the forest and just trot out of the bush casually to the finish in under 8 hours. It didn’t really happen that way.

Nothing compares to the start line at the Vibram Tarawea Ultra, it was beautiful. Walking in to the Redwoods forest at 5.30am there are  headlamps blinking through the tall pines, the start is illuminated and people in bright colours are gathering in anticipation. The start is like the best dream you’ve ever had, and you wake up from it abruptly a few hours later with wet pyjamas, torticollis and a cat on your face.

The count down had the air of excitement of New Years Eve, calm before the storm if you will… As the start gun went we all filtered through and became a glittering path of head torches, this was also when we realised we should have seeded ourselves a lot better, we were about half way back through the field. We had to walk for a good 15 minutes which was a bit frustrating when you have just tapered for a week and want to beat a cyclone to the finish line.

I ran with Yuliya and Gemma for the first 20km and it was a lot of fun! We went fast through the technical softer trails after the Blue Lake Checkpoint, smiling the whole way and having an awesome time bounding through the trees.

Just after the Millar Road Aid station at 22km I hit a bit of a wall and felt terrible. I had a little fizzy Nuun tablet in a bottle that I poured water out of my pack in to, I tried drinking the spastic foaming mess and it was like a sherbet wheel exploding in my hand. From the 30mls I did get down I felt a lot better after five minutes and kept running, now I was by myself.

Around the 30km mark the elites started to pass by me, it’s so cool to see and ridiculous at the same time that anyone can move that quickly over rutted clay tracks and tree roots, in the rain, up hills! Sage Canaday was already quite far ahead of any other moving creature and confirmed that yes, Yellow is the fastest colour to race in.

I ran out of water and fuel around 34km in on my way down the hill. My quads still have recurring nightmares about the Grunt so I ran down slowly with little steps as not to thrash them and render myself unable to run flat. At the Okataina aid station the volunteers were amazing, taking my pack, refilling the water and making sure I had everything I needed. Greig my Personal Trainer/Jesus  miraculously appeared and came to help too and I communicated through a series of blinks and sniffs that I needed more gels and food.

My friend Dan ran with me for the small out and back part of the course in a huge poncho and talked, he is a great talker and perhaps could write jingles for radio if he isn’t keen on Engineering any more. He told me to say to myself ‘Running is tough but Amanda is tougher!’ I thought that was a shitty jingle because I didn’t feel very tough but as it was the first and only one anyone has written for me I ran with it (pun). 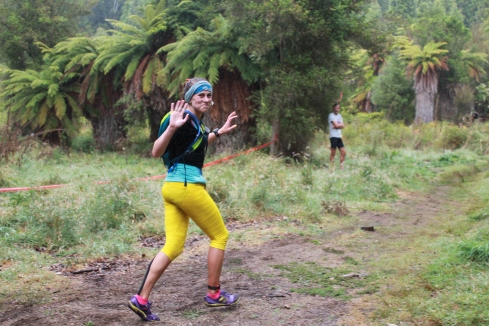 When you’re running so far you need to celebrate the little milestones; 35km- furthest I’ve ever run! 42km, a marathon, 50km, only ten more to go!

When my Garmin beeped to tell me I was at 50km I got a renewed burst of energy, for about 500m and then began the longest slowest 10km of my life. I walked at any slight uphill and let gravity take me down hill. My stomach was painful from being so dehydrated that it hurt when I run. I ran off the side of the track and tried to pee and there was nothing! I was terrified that Paul Charteris would emerge from behind a punga, misinterpret my straining face and tell me I wasn’t cool for pooing on the trail. I pulled my pants up to an acceptable height just in time to see Jo Johansen pass me looking strong and determined.

I got really pissed off with myself because every time I did start running my legs felt strong and I could make it up the hills easily, I myself just could not find the mental strength to keep running. I had run out of water again, eaten everything I had with me, and it took so much effort to convince myself not to sit down in the rain like a sad puppy and lap water from a puddle.

Having the time of my life

One of the course marshalls on a mountain bike rode with me for about a kilometre around the 55km mark, I think he was worried I would fall over with all the whimpering I was doing. It was great to have company after being alone for so long and made me run a lot more than I would have done.

At the final aid station I got some much needed water and soggy pretzels that had retained enough pretzel quality to suck any remaining moisture from my mouth and turn in to dry wall, then it was an easy 3km on road to the finish. I was going so slowly another woman passed me but I didn’t care. Until I realised we had 500m to go, no way I’m letting her beat me. After jogging 58.5km it was a 500m sprint to the finish line, always finish with good form they have cameras there.

I went to the first aid tent to get warm and stare at Sage’s socks-with-scuffs combination then leaned on Ben until I got back to the car and promptly burst in to hysterical tears. So many months of training, hard work, and one very long day in the rain had come to a close.

Yulia came 5th and the lovely Gemma was 4th

What I learned from this race

I’ll definitely be back next year, stronger, wiser, and fitter. I’m still buzzing from what an awesome experience it was running with passionate people from all walks of life and ranging from athletes to beginners and 81 year old legends. Paul Charteris the race organiser is one amazing man and I feel so privileged to be a part of the trail running community!