I haven’t written a blog about what my training looks like, because I don’t think people really care. If you are in the business of caring, I’ve written down what I did last week, with links to each run so U CAN HAZ a look at what I subject myself to in the pursuit of running faster!

My coach Kevin sends me an email each Sunday afternoon so I can see what’s on the menu for that week. Last week was the first week of a six week build up to make me run faster later in summer. Apparently we will build up to quite a lot of distance in this time. I am interested to find out how much ‘a lot’ of distance is…

This is what my training weeks typically look like

Mondays are always an easy run. Easy is about 70% effort, so 5.04 pace per km. I try not to look at my watch on these runs as the pace doesn’t matter, as long as it feels easy then that’s fine. I can run during my work day so I did an easy flat 10km loop around the Bays in the afternoon.

I do weights sometimes because I still think 22″ arms is a possibility. Also I don’t want to be completely weak in my upper body should I need to fight my way out of a wet paper bag, or carry the amount of food I need to eat in a day. I had spare time so I spent 40 minutes doing core exercises and rolling out and stretching my legs. I’m yet to meet anyone who does this as often as they ‘should’.

I went to The Waterfront 5km and put my upper body weight training to good use by holding a baby in a front pack while my friend ran the 5km. She was pushing a buggy with another human inside and ran under 23 minutes.

These are the type of crazies I hang out with.

Today’s run was 16km at a slightly faster pace than ‘easy’ so 75% effort. To avoid the wind I ran up hills and along trails around Mount Victoria so I judged this on feel rather than pace because of the extra challenge of doing hills.

I was dreading Wednesdays’ run. The weather in Wellington was typical, cold, windy and drizzling. I recruited my friend Dan to run with me, he seems to relish the opportunity for a long hard run in the rain. He’s weird. This run was prescribed as 24km at 80% effort so the pace we want to hit is 4 minutes 40 per km, or 12.8 km/h. It’s not that fast but if you add in a bit of wind, some rain, and the fact that it’s already 6pm and your dinner is so far away it makes it harder.

It was fine for the first 12km despite running in to a headwind, we were under the pace and it wasn’t too cold (I took off one of my two jackets!). The pace slowed down a bit when I put my jacket back on, and again when I had a gel. I don’t stop to change my clothes or to eat because I tend to just stop for ages and get cold and not want to start again. The last 4km of this run was pretty rough and full of expletives.

Some happy-go-fucky-ourself person had put a sign along Oriental Bay that said ‘Run More!’ a bit too cheerfully. Run MORE? You mean more than 24km? Run MORE in this rain? I booted the sign over as hard as I could and kept running. I think I must have offloaded at least one large coagulated takeaway soy flat white’s worth of boogers over 24km. 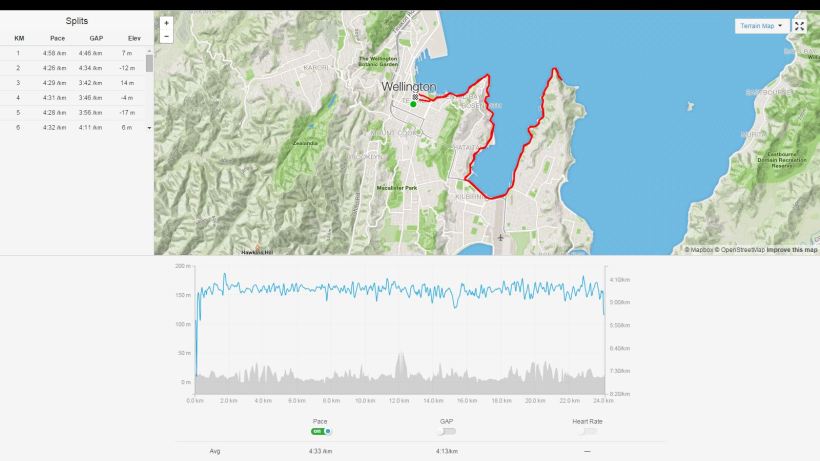 I was pretty exhausted after this, and when I got home I faced the insurmountable task of making my bed as I had washed my sheets. Wrestling a duvet inside of a duvet cover is a nightmare at the best of times so I just sat on the floor in front of it in my exhausted sweaty state and I cried and blew bubbles out of my nose in to a tissue.

Running related- I got a pedicure. You can’t just go around with haggard looking feet. It was a bit nerve wracking having someone poking around next to my nearly-there toenail on my right foot but it held on long enough to be painted a nice shade of green to match my Marmot jacket. Because  wearing a seam sealed jacket with bare feet is very Wellington.

I ran a 5km progressive run with my friend then we did 30 minutes of yoga at Les Mills Extreme to stretch out.

Fridays are always easy days; 70% effort for 30-40 minutes, maybe some yoga in the evening. This day I picked a really stupid route that had a lot of hills so it wasn’t a very relaxing run. At least I know where not to go next time. The best thing about this run was my shoes! I put springy new laces in these ASICS trail shoes that I’m Road Testing at the moment.

Saturdays at 8am I do track. This is usually at Newtown Park with a group of people and we go for coffee afterwards. If I can’t make it to Newtown like this week, I run at Karori Park. It is the field of dreams and is full of little kids playing cricket now that we are in to summer. 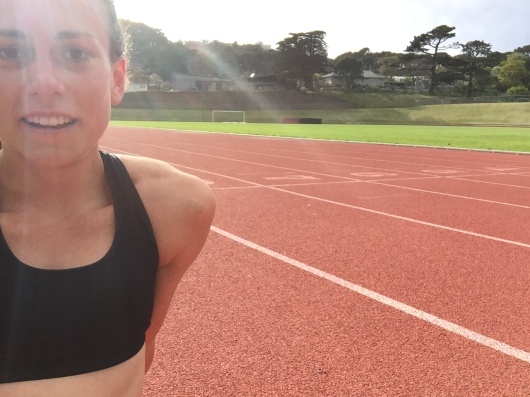 Newtown Park. Field of awakeness and Monkey noises and coffee

The goal for this workout was to run 12 X 400m in 82 seconds, with 60 seconds rest between each rep. I didn’t hit that time once but my reps were fairly even! By the 5th one I wanted to stop, but each recovery you get you feel like you can do one more, just one more. Someone stole my top when I was running. Karori isn’t so fancy after all. I did an easy 40 minute run in the afternoon. Because that is what my program says to do!

Sundays are always long run days. This is to build endurance, to look at scenery, and to get away from people for a couple of hours. This was supposed to be 32km at 5.04 pace but I had work on Sunday so it was quite late in the day before I could run and this was a good enough excuse for me to cut it short… 2 hours is still a decent run though right?

That is what I do most weeks unless I’m sick (self inflicted or otherwise).