Its taken me a while to finish writing this post. I didn’t think it was interesting, or that anyone would want to read it. Just another damn running post! But it wasn’t just another run, it was the best event I’ve ever done and what I did that weekend I never thought I could possibly do.

Colour coordination was the winner on the day

I foresaw great pain and suffering in day two of the Tassie Trail Fest, but took comfort in the knowledge that there would be no more extra bonus kilometers, no risk of leeches now that the rain had ceased, no smack talk and certainly no ‘racing’. I was right for the most part.

First up was the Cheeta Recovery 14km run. ‘Recovery’ isn’t the type of run it’s their bloody brand name. I was sifting around the start line, ‘Fast people at the front please’ someone was poking me forward. Please no.  I’ll just stay back here. Poke poke. Poke. FINE. Just a wee 14km of hills Amanda you can smash this run!

Five minutes in and I could feel my legs again, I was just behind Kellie and Yvette and in fourth place. Amandaaaah, this is not a 14km run, this is a 56km run, tone it down. So down it was toned. I slowed down to the steady long run effort that I had employed for the marathon and watched these two ladies power off in to the distance.

Photos thanks to Sputnik at iOMerino

Run smart, run strong. Forget about the speed, the placings, forget all of that because you have to endure a lot more than this run today.

I took my time at the first aid station to weep into the gummy worms then began the Kruska Climb. Tegyn Angel, fellow Trail Run Magazine Editor was right behind me as we both panted our way up the hill, having both run the 44km marathon the day before.  The expletive count was climbing in line with the elevation. This was all internalised; one simply cannot be seen to be being a lil’ bitch in front of these Aussies.

Tegyn broke the Blue Derby silence with ‘Raaaaagh more fucking switchbacks!’ Great, we are on the same page. Tegyn I hate them too. We suffered together for the most part of the race until Tegyn admitted to trying to catch me, which was the extra little thing I needed to dig a bit deeper and run away from him.

Hi-vis proved it’s worth yet again

The 14/15km run was done, and I held on to fourth place finishing in 1.32.45. There was just a two hour gap until the next run, the Running Company Launceston half Marathon.

Quick showers and a costume change then Luke chauffeured for the day out to Weldborough and the Blue Tier Forest. This is home of the Blue Tier Giant, the widest living tree in Australia with a massive 19.4 metre girth. Lol. Girth. Luke had previous knowledge of the area after running 18 or so kilometres off course during the marathon and coming across some men fossicking for Sapphires.

This half marathon had 680m of climbing up hills and over boulders, and featured four river crossings. Four as in eight because you had to cross again on the way back. For most of this race I ran with John Fegyveresi, the Arctic Scientist in a trucker cap. Apparently he’s a pretty handy runner, he finished some Barkley Marathon? Anyway… we had fun running back and forth over huge rocks, along single track and cooling our calves in the rivers. 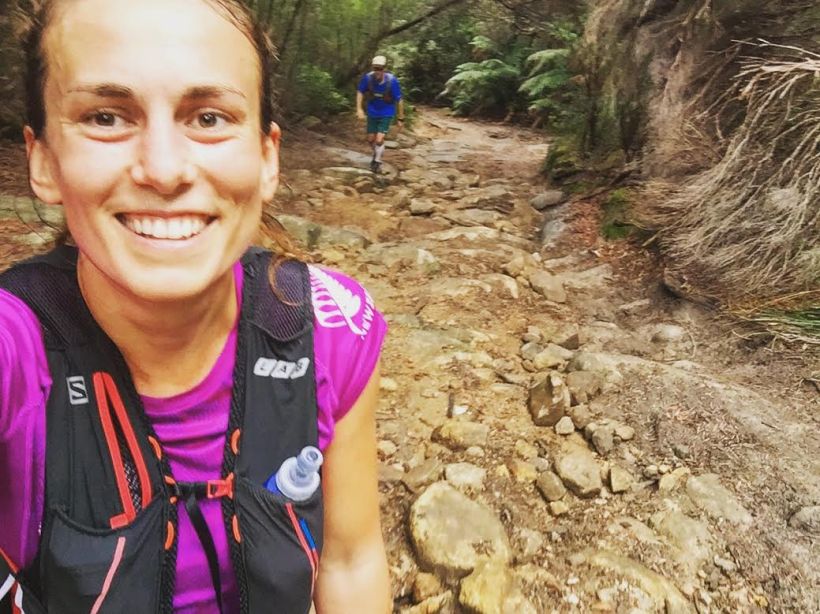 I knew a big downhill was coming up on MTB trails so I gave it heaps to finish and try to end the large amount of pain that I was in. I passed a few guys on the way down which was nice, muggles they were.  Yelling that they didn’t want the Kiwi to pass them (again). Chris Ord appeared out of the bush and chased me so hard down the hill with a camera at full noise, I thought he wouldn’t stop. That motherfucker. I came home in third place  so one better than my two fourth places but it was a terrible run! I was Le fuqued. So dead.  I lay on my back on the prickly grass with my feet up against a truck and ate bananas and beef jerky trying too forget that I had another run in just a few hours. 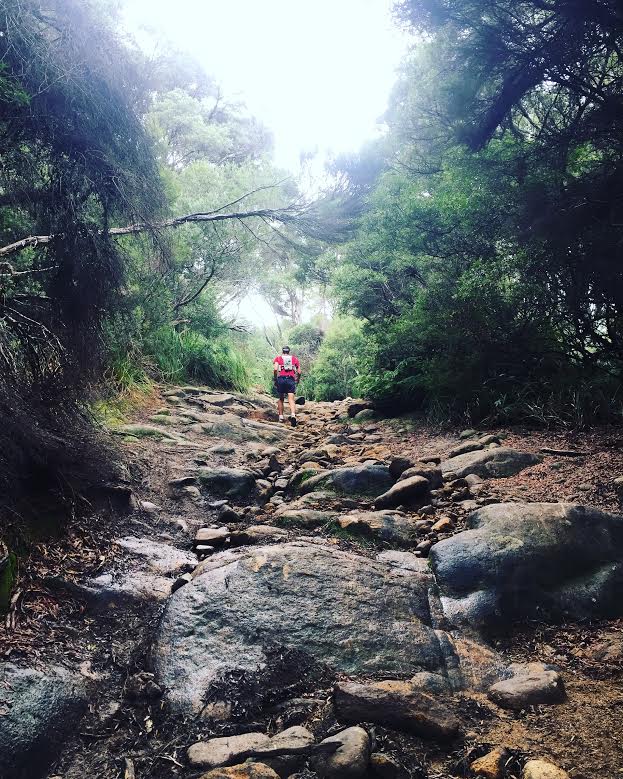 The boulder section of the half marathon

Luke said we needed to head back so off we went again. We drove past a dead wallaby/kangaroo foreign hoppy mammal on the side of the road who looked like I felt. We went to the Hub for showers, food, Kahlua and coke and a change of clothes and to mentally prepare for the final run of the day.

A bunch of bad people I met in Tassie

The night run started out at an easy enough pace and I realised I was sitting in second place. I rectified this in the first kilometre and thought I might like to sneak in a win if it was possible. Running in the dark is exciting. Leading a race in the dark is not! I had no idea how far ahead of second I was. I could see headlamps winking and winding up the switchbacks in the silence as I ran alone through the bush.

My knee was pretty sore as I descended the last hill. Each time my right leg hit the ground I swore. I tried to keep my form good and not limp too much, maintaining 180 fucks per minute for perfect cadence.

I came clear of the bush and glow sticks lit the way to the finish line at the Derby Town Hall. Up the hill, through the finishing chute, around the corner and in to the hall where the blow up finishing banner filled the room. I crossed the line to the band playing in a room full of people celebrating, amid the music and the disco lights, best finish line ever! I managed to win that one too, finally a first place!

After dining on Derby’s finest pizza and craft beer and enjoying the band we retreated to the hub for Cards Against Humanity and Kahlua.

Up again on day three. 2km to go then it’s done. 2km is nothing when you’ve already run 100, might as well warm up for the final dash for cash. My goal here was to run under 5 minute kms, a very lofty goal for my wee leggies with all things considered.

I ran the 2km cross country/trail course in 8.55, sub 4.30 pace thank you. I won the overall event; the Multi Day madness and picked up a pointy trophy and a swag of running gear, beers, medals, no jerky unfortunately but a heap of new friends which almost makes up for it.

I had such a great time in Tasmania, you can tell straight away that the people driving the event wanted to share their passion for trail running and they definitely succeeded! There was something for everyone with distances from 2km for the newbie trail runner to somewhere around 68km for the adventurous one with poor navigational skills, and the Multi Day Madness for those who want real ‘Value for money’.

I’ll be back next year to race up and down those fucking switchbacks, they don’t seem that bad now…