I often find myself at the start line of a race, with visible breath and a nervous laugh waiting for the starting gun, thinking back to the carefully considered decisions I had made that lead me to be there.

There isn’t a sarcasm font but if there was, that would be in the sarcasm font. Whenever I am on the start line I think back to the conversations I have had with my running buddies in which I reverted to being a 14 year old boy.

It’s all talk, but unfortunately when you’re on that start line you have to follow through and put your little leggies in to action. 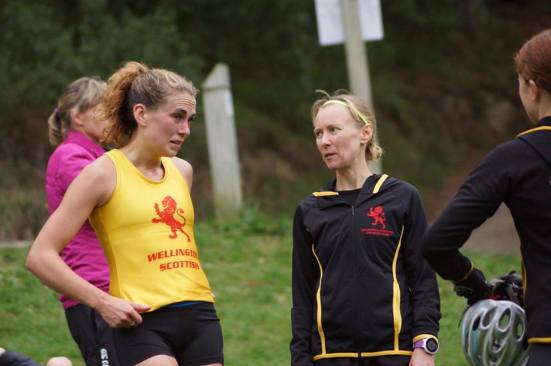 One lap of the 5km Corss Country course is a touch over 200m elevation. It circles around Mount Victoria, mostly on trails that have ample room for passing on the downhills, and lots of ruts for getting your footing going up hill.

I regretted entering the 10km for the Vosseler. This regret turned to fear when I stood at the finish line of the women’s race to watch people stagger over the line and collapse. Amanda, Amanda, Amanda, what were you thinking my dear? Earlier I had thought about switching to running the 5km, then it occurred to me that the Men did not have the luxury of choosing, and I should just suck it up.

There were three women in the 10km race this year, with most opting for the 5km event and a few avoiding the race altogether in favour of not breaking an ankle. The NZ Half Marathon Champs are in Christchurch this weekend and if you’ve trained for that then it’s a little risky to fang it around Mt Vic just a week out.

After most of a season running with just the ladies, it was strange to start with such a large group of men. Standing at the start line, hairy shoulder to hairy shoulder,  I had no idea where to seed myself so hung around the back near the more curvaceous ones. Nobody was giggling except Nick Whalley and it was only because I had asked him to. All giggling in an all man race is replaced by a low hum of the men making tractor noises while they figure out what machinery to use on the terrain to get the job done.

Sweet, am I only Senior Woman running this race? That means I will win my age grade! These guys look older than my dad, I bet they will still beat me. My ponytail is the second nicest one here, yesss! I wonder who else is wearing a G-string? (Death before VPL guys).

Gallop apace, you fiery-footed steeds, POW! The race was on.

The first hill was the worst hill, and all the way up the only thing I could think about was that I had to do it again in lap 2. Balls! I went out a bit fast to show off and because there was something wedged in to my bum to make me spring up the hill. Men run downhill a LOT faster than women and I got passed a lot whenever we were descending. I would catch them sometimes on the flat but not often enough to mention this in a blog post. 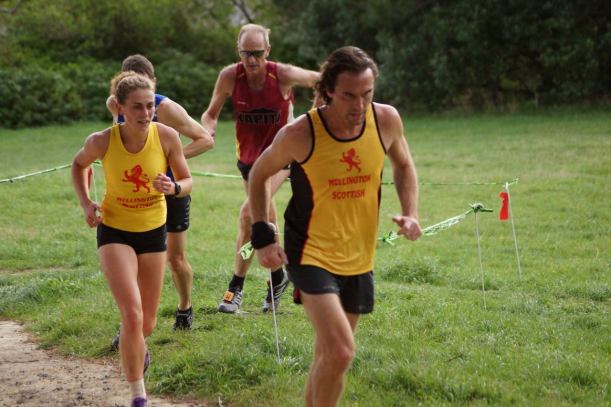 Me and my new friends off for a run

WHAC had strategically placed what I now know were SPIES (Aghast, agape!) at key places on the course. Hawkeye Ayesha on the flat, and Shady Sarah with a clear view of the steepest hill. If you want to have a good crack at NZRR you’ve got to know your competition well; their strengths, their weaknesses, the way their ponytail swings when they’re running at top speed, and if they make poor underwear choices for races.

That is my leg, I grew it myself

I don’t remember the race in great detail apart from the pain of the hills and worrying if I should be letting my legs recover on the flats. What I do remember is that everyone was cheering for me! The underdog, the one in the short shorts with hair like a high country sheep, she’s a girl! The rest are just plain old men! Hooray! It totally made my day 🙂

I finished the race in 53.18, first female home 33rd Senior Man home, 56th Man Man home out of 110(ish) runners, so I just missed out on being in the top half of the field by a whisker, by a string if you will.

Thanks to Sharon Wray for the pictures of me running. Sharon has great ponytail action when she runs.