On the 15th of September 2018, women all over the world rode their bikes together as part of the Rapha Women’s 100. Being in New Zealand we were lucky enough to be one of the first to complete the ride, and had the privilege of doing it around the rolling hills of the Wairarapa on a sunny day.

What a day for it!

I’ve never entered a cycling event before this one, they all seemed a bit intimidating and I was never sure if I was fit enough or if I had the right gear. The last time I cycled with a large group of females I was at boarding school, and that was just every 28 days, not 100km. The way the event was described made me confident that it would be fun, and that there was no pressure if I got tired and wanted to stop riding.

‘If you have never thought about completing 100 km, start thinking about it – you will never be in the company of so many supportive women cyclists. And if you can’t manage 100 km without stopping, then you don’t have to. You can stop for coffee and cake.’

I have attempted to go on a ‘Easy ride to meet people’ with a bunch of mostly men and a few women. Before we had ridden 3km I was hanging off the back with my heart rate at threshold, trying in between gasps to introduce myself to the other ladies who had also been dropped like some regrettable 2am dance moves in Estab. This heart attack continued for a further 60km.

When we eventually stopped at the cafe, I got there last so was the last person to get my coffee and scone, this was devastating when I had burned matches, lit my curtains on fire and then razed to the ground any remaining energy I had. JUST GIVE ME THAT BUTTERY SCONE NOW! I enjoyed that ride because it was challenging, but it wasn’t easy and I struggled to meet people as I could. Not. Breathe.

The Wairarapa Women’s 100 looked like it would actually be easy, and I figured if I do get dropped it doesn’t matter because I know I can handle a tough 60km and just finish at the cafe.

On the day there were three starting groups based on a description of how you feel and how you want your day to go, rather than a specific time. This was great because as someone who has never done a cycling event, I had no idea how long it would take me to ride 100km. I picked the last start group;

‘You will have completed a 100 km ride before & although not feeling 100% will know you can do it with encouragement :)’ 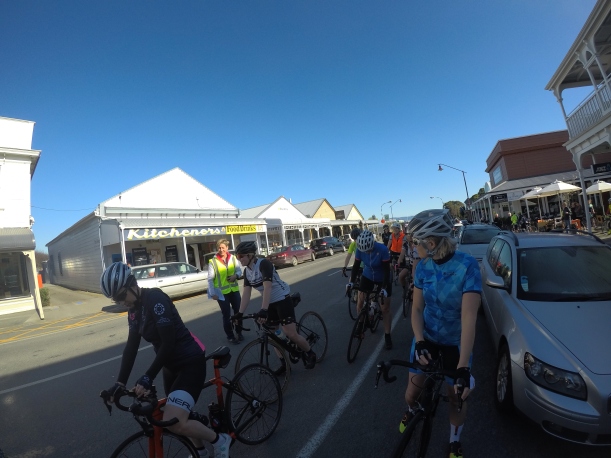 The start of the ride! People in matching kit make me nervous.

We set off along the quiet roads winding through vineyards that I had last ridden along 9 glasses of wine deep, and I thought how great it was to return here and have the same level of enjoyment with just water, and a way fancier bike.

Within half an hour our starting group of 30 had split in to a few smaller pelotons (am I using the right word?) and my group formed a sassy little chain gang. 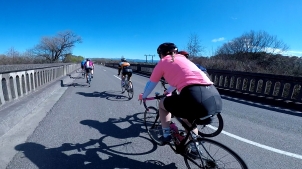 The Peloton crossing a bridge 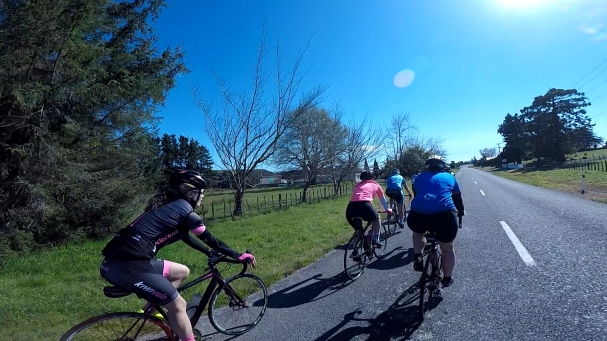 Me sort of keeping up with Rachael Cunningham

Riding 40km an hour rotating through the group and taking turns at the front, I felt amazing, it was so cool! I felt so privileged to be among a group of strong, badass lady cyclists all sharing the work, encouraging and motivating each other. We also looked out for each other when aggro motorcyclists tried to scare us shitless by riding extremely close and tooting. Jokes on you, man, no matter how scared I got I wasn’t going to shit in my new Rapha kit.

We went through the 66km loop in just over two hours, I couldn’t believe how fast it was. Riding in a bunch is so much easier, and more fun, than riding alone. From around 50km I had run out of water, I tried to drink a lot to keep up my milk supply with feeding baby E. I was so looking forward to seeing her at the end of the first loop and expected her to be needing me, or at the least happy to see me. She didn’t care.

I quickly got my kit off in a non-sexy using my mammaries to feed my child sort of way, made easier by my awesome Cadenshae feeding bra, and baby E had a wee tipple of the nipple.

Because I stopped my fast group had all sailed straight through on to their second lap, so I set out on my own for the final 34km. Half way around a group of amazing ladies caught up to me so I tagged on the back and so began another little coordinated effort, taking turns to lead and chatting about riding. 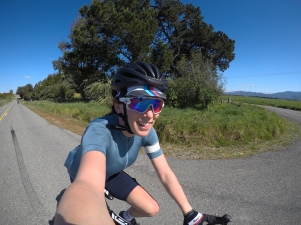 These ladies were off for a run straight after this! Legends.

I managed to finish the 100km in about 3 hours 20 minutes, which is how long it takes me to do 70km around Wellington on my own! You can see the route on Strava here.

I was worried about being able to feed four month-old Baby E on this ride as she won’t take a bottle, but that turned out not to be an issue at all. The Village cafe was the perfect place to stop off and do this. I was also a bit worried about riding for so long with my period #ladyproblems but that was a non-issue as well. I used a cup for the first time and it was hassle free, I didn’t notice it at all.

I had an amazing day out riding with cool new people in a beautiful new place. It gave me a lot of confidence in my abilities, and I rode 100km! The event was casual in atmosphere but super organised so that we had all the information and guidance that we needed to make it a fun and stress-free day on the road. Everyone was very supportive, from the guy who made sure we were taking the right turns on the road, to the riders, my awesome partner, the guy who put my chain back on while I was breastfeeding and the cafe staff, everything was ka pai! 10/10 Would recommend!