‘If you don’t have anything nice to say, don’t say anything at all.’

I know that what mum meant when she said this was to refrain from calling my brothers stupid dicks or poo heads (in public, say what you like on the farm), but the phrase has stuck with me like dried cow shit to a bike frame. 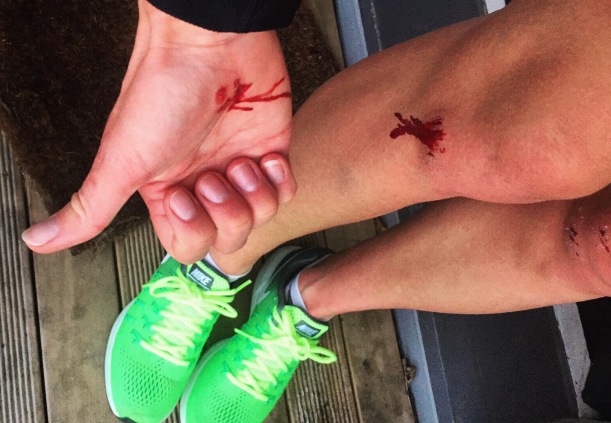 Being a generally happy human, a ‘yes’ person, and doing nice things for people because that is what gives you joy, that’s all a bit hard when you aren’t feeling yourself.

It’s been a challenge the past ten months being injured on and off, on and off, and never quite getting back to training properly. I thought it was best not to write anything because, well, I didn’t have anything nice to say.

It has taken me months to realise that I do have nice things to say, I just need to change the way I think and focus on the positive. Some really nice things have happened to me in the past few weeks, here’s the first one.

Nice Thing #1 I joined a gym

I was struggling along with what I thought was a tight muscle in my hip, it was painful and I had been unable to run properly for two months. I got in touch with my old personal trainer Greig Rightford at Healthfit Collective gym and got him to look at my running form. Something was definitely a bit off. He told me to stop running immediately. I hated this idea. ‘It will be hard to stop but just don’t do it, it will be better for you in the long run.’

Things to do when you aren’t running

When stopping running didn’t stop the hip pain I went back to my GP, and got referred to see a sports Doctor. When I finally got my referral and got the call from them, the next available appointment was two months away. T W O  M O N T H S !

I was at home crying about the hot pain in my hip, and thinking about how much I hate fit and able-bodied people when Greig emailed to see how I was.

Just thought I’d check in with you – how are you progressing?

I was quick to say that I’m sick of trying to run, I give up. I’m done. Greig disagreed with that sentiment and got me to come back to the gym ‘I want to help you in any way I can.’ I’m pretty amazed at how nice people are to me, and this made my month. 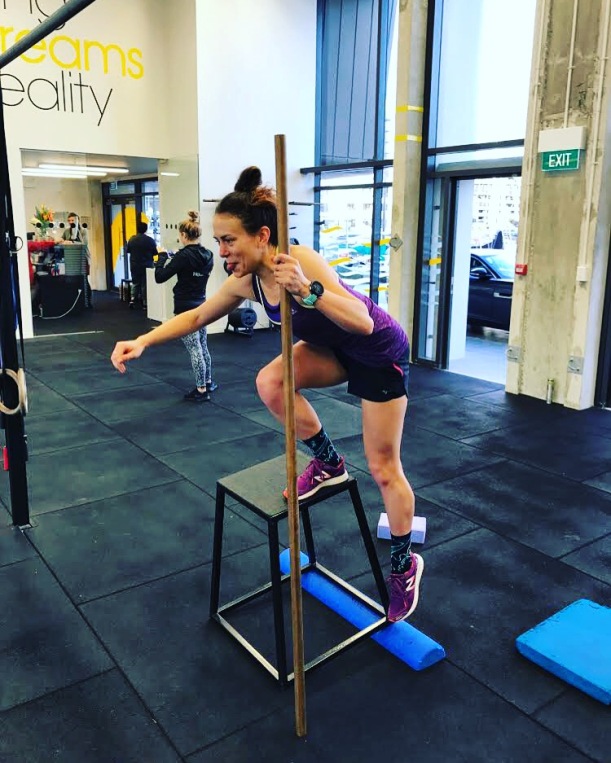 In my second week of trying to get motivated to do early morning gym rehab I bumped in to Ruth Highet, the Doctor who helped me with my first stress fracture. When I told her about the wait to see the other Sports Doctor she said that was ridiculous.

Two hours later, sitting at my work desk I got a call from her office, and had an appointment for the next day at 9am. X-rays done, follow up appointment, MRI, all within two weeks. Everything sorted five weeks before I would have seen the first sports Doctor, incredible.

Some things to stretch and poke your bits with

I feel incredibly lucky to know such generous people, and so grateful to have had help to get my injury diagnosed, my body healing, and my mind thinking more optimistically.

I’ve only said one nice thing, there are so many more and so many people who have gone above and beyond to help me out, I feel very humbled.

Right now I’m waiting to get the results back from my MRI, it is likely a stress fracture in the area around my hip socket, sacrum, or the top of my femur. If you guess correctly you win a prize!

I’ve thought a lot while running, about how much I love to do it, how rewarding it is, and how when you dedicate yourself to something so fully, how great the rewards are that you get in return. I’ve thought about how it’s helped me through depression, and changed me from that person who would hide in her room all day, to someone who runs outside in a crop top and posts pictures of her crotch on the internet. I’m so grateful for the ability to run, and I was so caught up in it that I never thought about what would happen when it was gone.

On Friday two weeks ago I went along to the physio. I’d had the X-rays, I’d sat through a vey lubey ultrasound in a variety of awkward positions, and every possibility of injury had been eliminated except for one thing, which was the only thing that it could be. It wasn’t the best news, but it wasn’t the worst

‘You have a stress fracture, most likely in your pubic rami. Mentally prepare yourself for not being able to run for the next six months.’

I picked this picture because the red makes it looks really sore.

After delivering the news the Physiotherapist then did some release work on my right quad with needles. I feebly pretended my tears were because of the needling and electric pulses making my leg convulse, but it wasn’t. I was pretty devastated. The Physio handed me some racy yellow crutches with instructions not to put any weight on my right leg and off I hobbled.

People like to remind you that there are other things that suck more than not being able to run for six months, ‘It’s not like you have cancer’, ‘You can still wipe your own ass’, or ‘At least your birthday isn’t on Christmas Day and people only ever give you one present’. These are people that don’t run, who see running as evil, to be avoided, and who have never felt the joy of a bag of jelly beans melting through the pocket of their tights, or the wind blowing their spit in to their ear.

To the runners, you might as well have lost the entire leg. They offer their condolences, they know exactly how hard you worked to get your running to that level, and they know that feeling you chase that you’ll now miss out on until your body agrees that you can run again.

To properly diagnose a stress fracture you need to get an MRI, as it won’t show on an X-ray until the bone starts to heal. Two weeks of yoga, spin class, Pump, and walking a few kilometres each day meant that my stress fracture was definitely NOT starting to heal. To get an MRI, you must see a physician (you can’t be referred to get one from a physio or GP). I went to see Ruth Highet, a well known Sports Physician in Wellington. I took an instant liking to her when one of the first questions she asked was ‘ What’s your PB for a 10km?’ None of this ‘Why do you run so much?’ nonsense, this was someone who I could relate to.

See the white part on the upper left corner, that is the stress fracture

Ruth showed me my bones on the screen and said that if I had gone for one more run I would have completely fractured the bone, so I guess I am pretty lucky in that respect.

How does one get a stress fracture in the pelvis? There are many reasons, there may have been 120 reasons why I got one, here are a few contributing factors and I am sure all of these helped me to get my stress fracture.

I have noticed changes in my body already, I FILL an A cup bra now! Badonk-a-donk. I have no visible abs any more, and my right leg is slowly shrinking and losing muscle definition with not being used. I’m beginning to look and feel squishy and lop-sided, like a pair of room temperature testicles.

I used to pride myself on munching down a giant bowl of porridge for breakfast, a foot long subway for lunch, then an entire pizza for dinner, and snacks, and pudding included. We went out for lunch on Saturday, and I had my first DNF in almost two years, I just couldn’t finish my fries. I felt so defeated, leaving that food there on the plate. Those perfect hand cut crispy potato fries with their spicy tomato sauce, lonely, and going cold, destined for the scrap bucket when they should be in mah belleh.

I have not dealt with my loss of mobility very well, and I feel really pathetic for it. Where did that strong person go? The one that could conquer mountains, the one that people told ‘You inspire me’, and why has she been replaced with this sad girl who cries and can’t finish her fries? It has been a challenge getting use to using crutches, and a few times I have thrown them away in frustration, only to have to crawl to get the dumb things back. I also get a little envious of people who can still workout, which is hard to avoid when you work inside a gym! 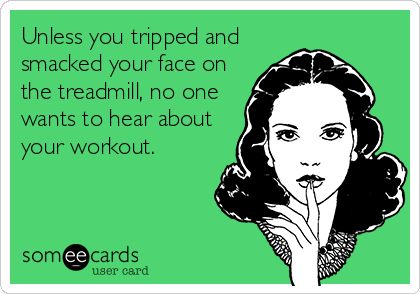 I haven’t hit anyone with my crutches. Yet.

I think part of why I got so upset with being injured, is that I thought my happiness was directly tied to my running, and if I stopped, I would become depressed again. One day leaving the sports doctors I walked/ crutched out past a group of people playing basketball. They were all different shapes and sizes, some tall, some wide, some scrawny, and all giving each other absolute hell and having a damn good game, in their wheelchairs. Watching the little people in wheelchairs be sandwiched by the big ones and have the ball stolen from them, and seeing them keep playing with the same determination made me feel a whole lot better about my own situation, and I didn’t cry again after that. 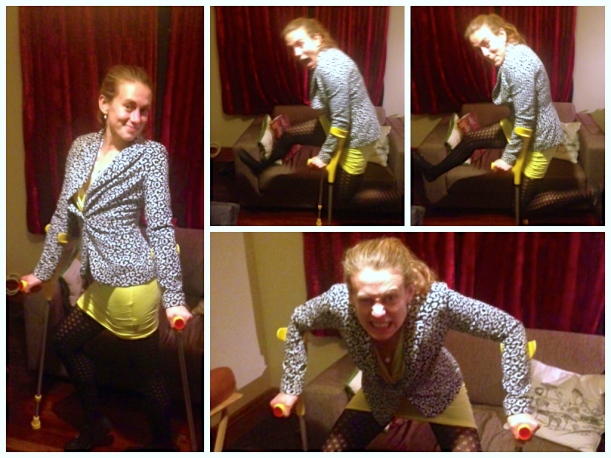 Yes, I did buy this dress to match the crutches.

What I can do now (2 weeks in to recovery)

What I am working towards