I haven’t told many people about my first time. Have you?

It’s always going to be a bit embarrassing, but it is a rite of passage that we all must pass through. Your first time will always hold a special place in your memory. A painful, awkward, sometimes shameful place, but it is a starting point from which you learn and grow. For some it puts them off ever wanting to do it again. But some of us get hooked. 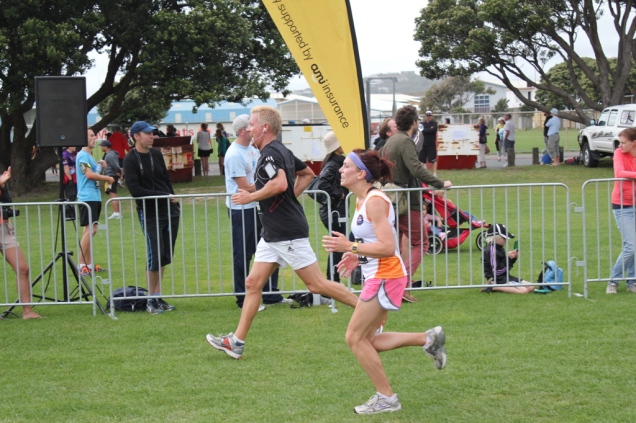 My first time! Round The Bays Half Marathon in 2013

The first proper race I ran was Round The Bays in Wellington and I’ve been back every single year since that first magic run. For the past four years it has been in support of other runners, and this year, even though I wasn’t fit, and I was certain to be slow and perhaps less fabulous looking than other years, I wanted to run it again!

2013 – My first half marathon, 1.38.09 and dead legs for a week. Alexandra Williams won the women’s race in 78.15, who were all these crazy fast runners? Reading this list again today, those names are some of my best friends and training partners. Was it worth the hours of training that summer and the pain for a week afterwards? A thousand times over.

2014 – I came to the event as a supporter and pushed Naomi Sparrow in the buggy around the Bays while Mum and Dad raced. I didn’t tip her out onto the road and didn’t trip anyone over so will call it a victory!

2015 – I ran alongside my friend Hinano to pace the 50 minute group for the 10km, I would post a picture of us looking fly AF and matching strides but they cost $30 for one photo. Ah, race photos.

2016 – I had real job this year, pacing the 10km. I run-commuted in to the city, paced, then finished off a long run totalling 28km. I look quite happy about it too. 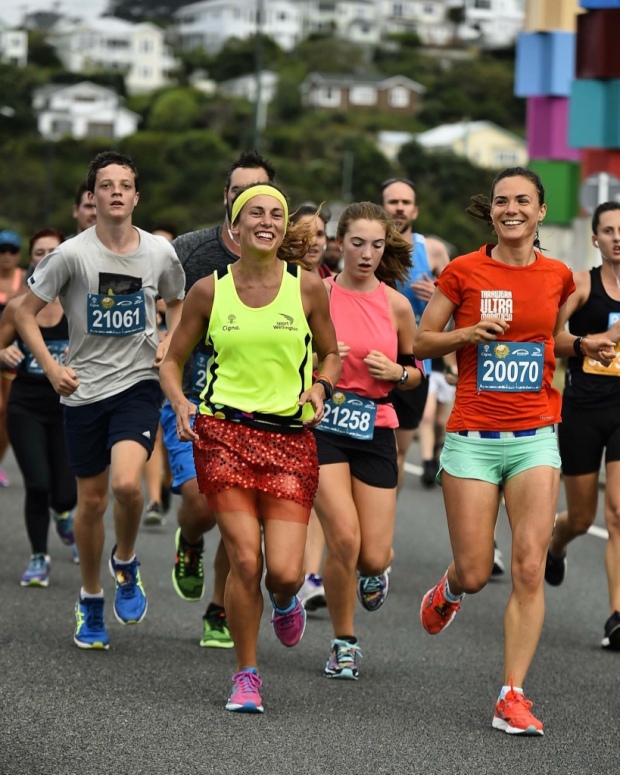 2017 – Was spent pacing the Half Marathon 1.40 group. I was coming off an injury and pah-robably should not have run this fast. At the 17km point things got a bit rough but I made it across the line in 1.40.11 which is only half a second slow per kilometre, pacing is hard! I was also an ambassador for the event this year and met a lot of very cool people in the process.

2017 – Most enjoyable half marathon I’ve ever run!

2018 – Round The Bays run in Wellington looked to be a race where I ran mid-pack and faded into the crowds. Wait, what does fade mean? If I can’t earn my way on to the podium as a means of directing attention to myself there are plenty of other ways I can do it. 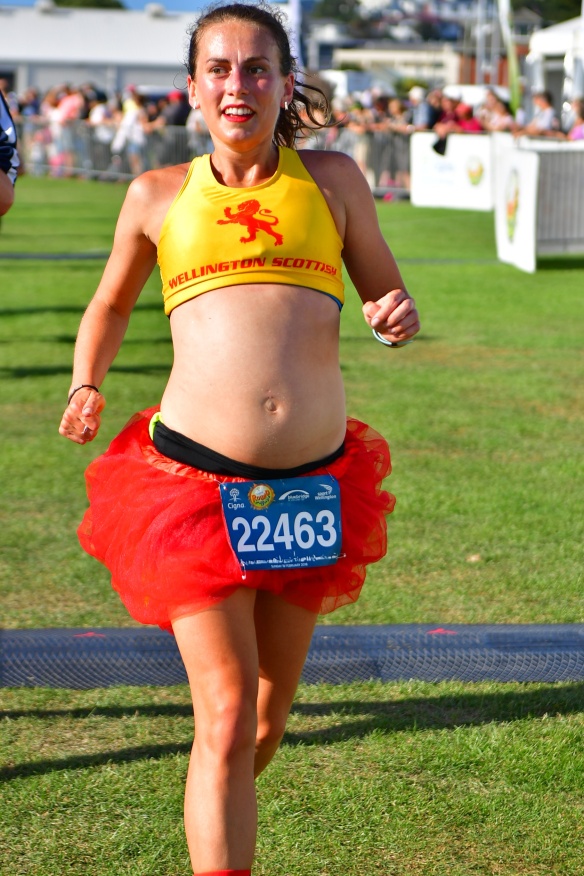 The thing that concerned me most about this race was what I was going to wear. My Scottish club singlet was now riding up over my belly button (an outie, I have an outie). Most of my shorts are tight to the point of being uncomfortable and give me little love handles and 100% of my sports bras are too small but since boobies are still a novelty I am yet to replace them.

I went for the only club top that remotely fitted me and paired it with red Ruby Woo lippy, Mr B’s flash new Giro cycling socks and a red tutu. The result was fabulous.

I planned to run this race with the 50minute pace group of JT, Rampant Lion who is always keen for a scandalous chat, and Peter Murmu, another of my Scottish team mates. The thing is, when the starting gun went off we were well back from the timing mat. I had a good 12-15 seconds to make up if I was going to hit exactly 50 minutes for my gun time. Gun time is the real time, it’s the official race time and this was an official race for me god damn it. 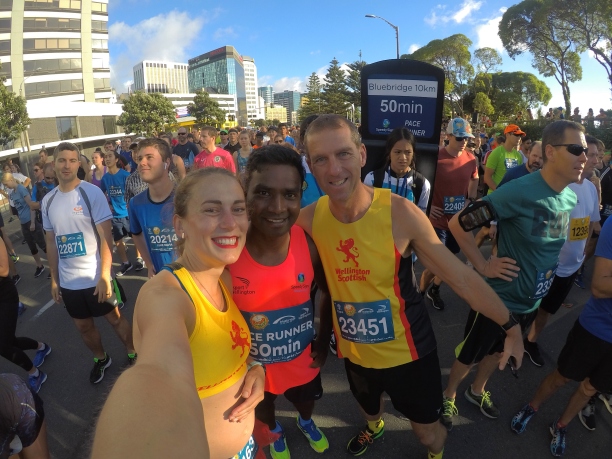 I set off at a manageable pace and within the first 2 kilometres passed a lot of the people who got far too excited and went out at 4min pace when they are a 50 minute runner. Not me, years of experience and a large tummy takes a bit of that eager premmie pace out of the legs.

I didn’t run balls to wall, just fast enough to be making some sort of effort but not puffing too much or putting too much strain on my body since it was carrying another smaller body inside of it. I passed a few people in the race who would eye me and the belly, attempt to overtake again, then concede defeat and disappear after a few hundred metres. I heard someone yell at me ‘You go Big Mama!’, that’s a new one. 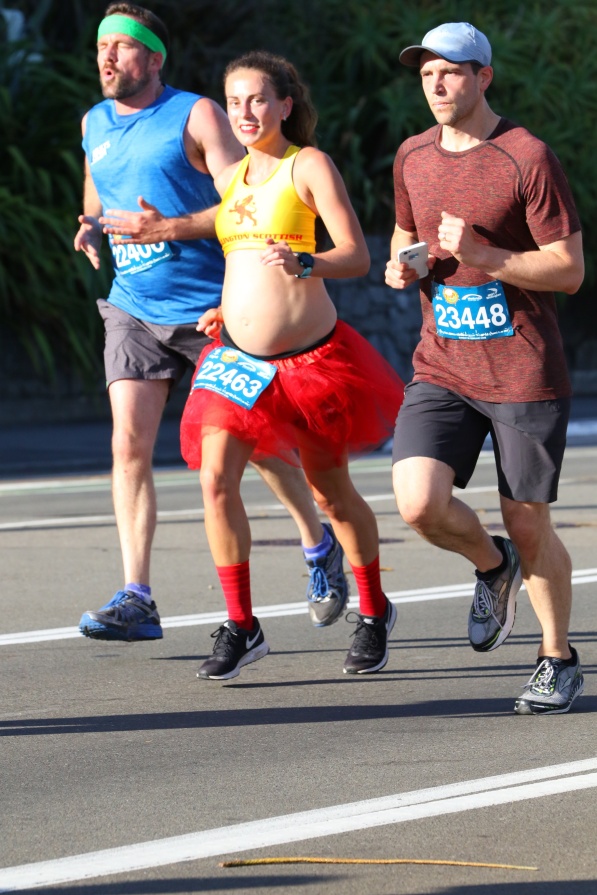 I got to the wind needle just in time to see all the fast people in their final finishing kilometre for the 10km and half marathon races. It’s always such a buzz to see these faces and cheer for them as they’re busting their nuts/ ovaries while I am floating along like the classiest red balloon you’ve ever seen. 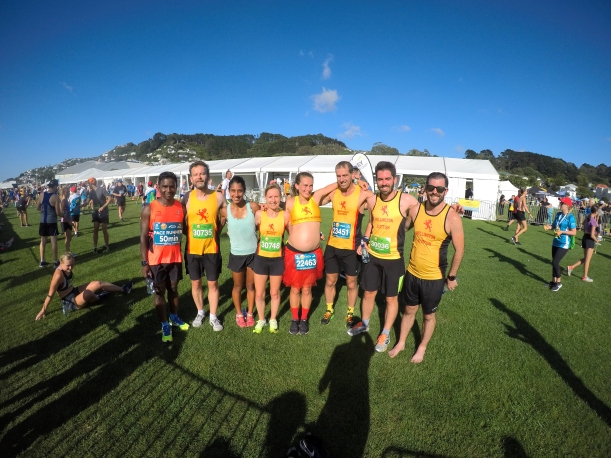 I finished the race in 47.41 and was 36th female across the line, 10th in my age group. If we further segment the results data I was FIRST AMANDA! Basically I won but there isn’t a prize for it. Kinda hoped I would join Nicole and Ayesha on the podium to make it a Scottish trifecta but I was about 7 minutes behind schedule for that.

I’m looking forward to running this event again next year, hopefully a bit faster! The best thing will be having my little cheer squad at the finish line, or perhaps on course with me if I can find a tiny red tutu and some matching socks for her racing debut. 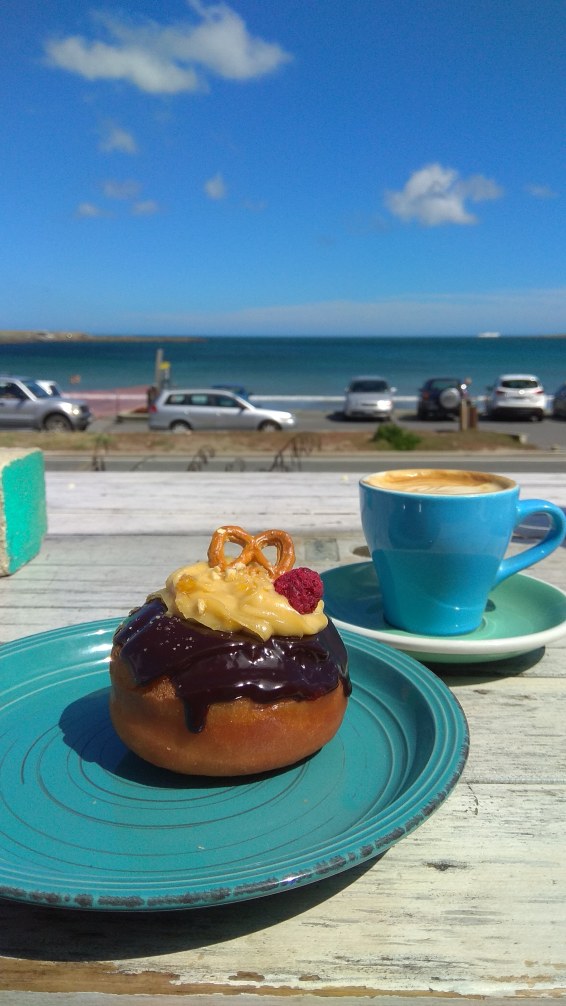