It has only just occurred to me, that running isn’t fun.

I don’t ever run with music, my head (or the space inside it) makes the music. If you see me out running this is what is going on…

Here are the lyrics for your reference:

Yesterday the run that my lovely coach set for me was 24km at 4.40pace, which shouldn’t be too hard, at least not at the beginning of the run.

Before I set out, I was like, uber-stressed about running wearing all-black because I had failed to plan my usual colour coordinated attire. What would Chandima think if he saw me out running in black on black with teal Nikes and no other teal! I changed my top to a teal Lululemon number (crisis averted!) and headed out the door, satisfied that I was aesthetically athletically ready to crush this longer tempo.

I knew it would be a HAAM of a run after the first 200metres. It felt like I hadn’t been stretching or rolling out my legs as often as I should since 2012. Let’s see how it goes, let’s just run at the pace for as long as you can and see how it goes. GO.

I went through a broad spectrum of emotions on this run, these are a few.

Misanthropy– Toot or ‘Awwww yeeauh gurl’ at me again and I will cut you. No I don’t have a knife, I’ll use the edge of my Snapper card. Can you not see I’m attempting to run away from you? Leave me be you lobotomised bottom feeders.

Self Loathing- Why is this hard for you? You’re just being pathetic. You run this fast all the time, why is it hard today? Probably because you haven’t brushed your hair in three days you bloody feral. You should just call it quits and go home and shave your head, it will solve so many problems.

Numbness- Perhaps not an emotion so much as a physical feeling. What is happening to my right foot? Is my shoe on too tight? If I still can’t feel it after 12km I will stop. Surely that’s a problem you just run through? Planes can still fly with one functioning engine right so I can run with one functioning foot?

Loneliness/Neglect- My usual Wednesday buddies are on different training schedules (and are maybe just a wee bit too fast) so I had to suffer alone. I would rather run a few kms behind them alone, but just with the comfort of knowing they are there. (Single tear)

Arousal- Wait, what is the opposite of this? I definitely had no runboner at any point on this run. I did admire my reflection in the window of a maroon Rav4 but it was to check my form rather than my sexiness. I’m already well aware of how sexy I am.

Amazement- Holy shit, I can feel my foot now! And I can’t feel the pain in my calves, shins, quads and hamstrings that plagued me for the first 15km. Lalalalala lalalalaala lalalala lalalaa…

Is this how it feels when people who hate running go for a run? Like a death march, like being slowly tortured by a domestic-ated abusing cat that intends to kill you eventually but wants to enjoy the process? I hated every step of the first 10km. I passed people I knew and managed to squeeze out two smiles which took so much effort that I think I dropped the pace off by ten seconds per km. 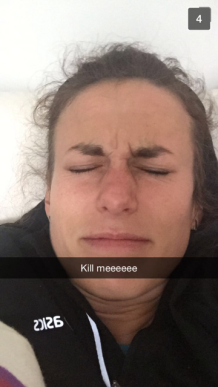 At the 12th kilometre I turned around. The sun was going down over behind Makara and the road winding back around the coast was golden and sunny. I told myself there were lots of great things happening on this run! Look at that sun Amanda, ain’t it grand! Big old firey hellish ball up there that is never quite puts out enough heat to account for how cancerous it is.

Every step hurt, and I was still holding the pace, I just didn’t want to! I promised myself that if I finished the run and hit the goal pace I could get a new pair of racing flats which was super motivating because I don’t need them and things I don’t need are much more exciting than the necessities.

Room for another substratum of sports shoes methinks.

I have a clear understanding now of what people are feeling when they say that they hate running. If you push through these runs though you will be the little Spanish Flea tinkling around the Bays humming tunes to yourself and smiling. Just keep at it. Buy more shoes.

This is the hateful run if you want to see it.