Word of advice, don’t enter a race with the idea that you are ‘not going to race it’.

You’re either bitching out and making an excuse to go slow, or you are a delusional post-injury runner who thinks that they learned something from seven months off and will take things easy now.

Turn up to the Scottish Waterfront 5km race with the idea that you will be a supporter. You’re the Captain of the women’s team now so you need to be present, and clapping, and smiley. Pay $8 for the entry, to you know, give the club some extra cash because you are such a good person.

You’re going to be sensible today, you didn’t do the 16km that was on your training plan because you are still getting over the horrendous cold that put you out of action for two weeks. (The cold that lasted for two weeks because you kept trying to run before you were better, and running in the rain, and just being an idiot in general). 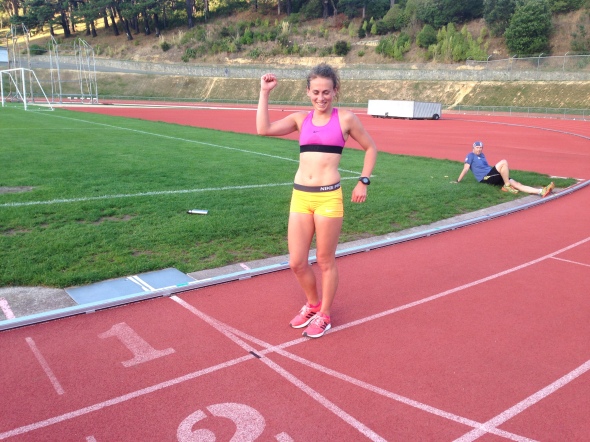 Oh look, you’re already in your running gear! Co-inkydink? I think not. Let’s just jog it you say to yourself, you can feel your eye twitch because you know you’re lying. Coach Kevin says that if you must run, it is best to run with the 25 minute plus group so that you aren’t tempted to race.

With each minute that passes before the start time you adjust your goal pace to be a second faster, arriving at a still quite sensible pace of 4.45 per km. Sensible for the runner recovering from a chest cough, green snot and stress fracture? Yeah sure!

You don’t warm up because you don’t need to before this non-race, because you are going to jog it.

This is the sort of logic you are using

Set the scene: You are standing amongst a gangle of 17 year old boys at the start line. Lanky awkward boys who look built for running because they haven’t discovered beer yet. All wear size 12+ shoes that none have ever learned to tie properly. One minute to go until the start time. One of the lankies starts to count down from fif-ty-nine, fif-ty-eight, fif-ty-seven, thankfully his voice breaks in to a high pitched squeal and he stops the countdown.

Up until someone says Go, you have made good decisions.  That magic word go. The ‘Go on throw caution to the wind!’ kind of Go. Go NUTS.

Upon hearing GO! we all speed off through the first kilometre, weaving through meandering crowds on the Wellington waterfront. The plan of doing the sensible 4.45 pace isn’t 4.45, it’s 4.20. That is still ok you think, I can hold this pace, it’s still cruising…

Views on course of the Scottish Waterfront 5km race

The lankies start to fade after five minutes. You stick to an even pace and cruise past them, making sure to run as close as possible up behind them to let them know that you make angry breathing noises when you run fast. This is where it becomes hard to stick to an even pace, not physically, mentally. In front of you are 12 more lankies, clomping size twelves along the pavement and fading fast. All have targets on their backs, ‘Hey there, if you speed up to 4.05 you can pass me! If you do an even 4minute you’ll pass me too! Faster faster faster!

Your ego takes control of your legs and you now have tunnel vision where you can only see targets ahead and nothing. Else. Matters. You hear Hinano’s voice in your head ‘Run with your balls!’ Balls to the wall, you give it 110%.

The familiar feeling creeps in, the lactic acid in your quads, the spit gathers at the corners of your mouth, you drive hard for the finish line and with a final burst of speed make it past the orange cones. You sit on the ground heaving and panting for a split second before realising that you jogged that race. So you stand up, breathe normally, and walk calmly over to talk to Coach Kevin about your future jogging plans.

My final time for the 5km was 21.17, a good 100 seconds off my PB but because I ran down all those stinky teenagers and I feel like it was a good run. An ego boosting run. I have been back in to running for two months now after seven months off so anything is a win!