The night before a race is like the night before catching a flight to go on that holiday that you’ve been saving for months for. You’re afraid that you’ll sleep in and miss it, so your body wakes up every hour. You get stressed out that you’ll be too tired from not sleeping and not enjoy it as much, or that your glands are sore, your achilles is getting niggly, or that you’re going to be like that poor guy who shat himself during the marathon. Yes, that will be you. All of the above and MORE will happen to you, so panic now!

Start line of the 2014 NZ Half Marathon Champs

The night before the race- Amanda the avid Rugby fan, like all other patriotic New Zealander’s watched the All Black’s test match. Coconut water in one hand, vege sausage rolls in the other, I sat facing the screen, resting my limbs and feigning interest in the wads of muscle hitting each other at speed while I imagined tomorrow’s run. My pre-race plan is to eat as if it’s your last meal, cram as much in as possible. Don’t eat Haribo Gummi bears or large quantities of raw fruit, just eat your normal dinner but a in a portion size equal to your bodyweight at 18months old (Consult your Plunket book for an accurate measure).

Morning of the race– Wake up an hour before your alarm goes off after your third dream about missing the start line or arriving there naked. Eat breakfast, for me this is porridge with chia seeds and all this other fancy organic stuff that I think I need but have no idea what benefits it actually gives me.

While the porridge is porridgeinating I make a plunger full of coffee. This part of my race prep is critical. Half way in to your coffee (Which you alternate with mouthfuls of porridge and bits of a sudoku) the time will come. It’s always just as your porridge is the perfect temperature, just as you’re cracking the hard part of the sudoku, the coffee starts to move. From this point you have exactly 45 seconds in which to down spoon, get to the bathroom, and pull down your pyjama pants.

Getting all your business done well before the start gun goes off is essential so that you have peace of mind while running in your yellow pants. If you aren’t a coffee person then perhaps go the other way and have an immodium if you’re worried.

I was really confident going in to this race. I hadn’t raced a half marathon since running this exact event a year ago, and that still stands as the worst race I’ve ever run. I learned many valuable lessons in last year’s half marathon. I went out too fast, I was coming off an injury and had done one 7km run in the month leading up to the event, I wore the wrong clothes in the wrong order, and perhaps the biggest and most painful lesson was that I didn’t cut my toenails before the race. Bloody hell, it hurt. 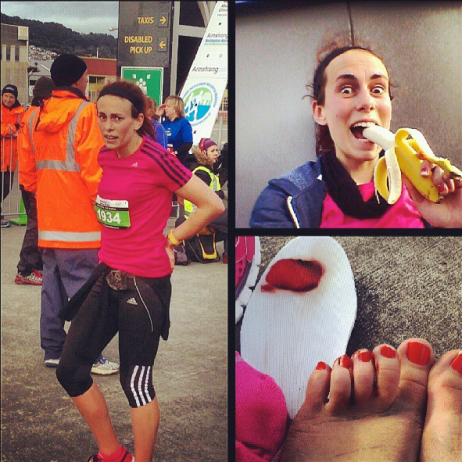 This year my friend Chan offered to pace me. He wasn’t too fussed about getting the best possible time, and for me this run was about getting the little things right and pacing myself. What I think Chan actually wanted was a posse to run with to bear witness to his popularity. Me and another man who was dressed a little like Papa Smurf were Chan’s bridesmaids as he paraded around the bays, us tucked behind him as he gracefully put one foot in front of the other, waving, and smiling for the cameras, ‘Hi Chan!’ ‘Nice running Chandima’, Gooooo Chan!’.

We planned to run the first half at 4.15mins/km and stick with the the 90min group. We went out a bit faster than than that and just focused on keeping a steady rhythm. There was a bit of wind as we headed out and we tactfully tucked in behind people so that they took the brunt of it. As we came to Cog Park an escaped lunatic dressed in a skeleton onesie leapt up and down and yelled ‘Go Broughty!’, Laura Shields you are amazing!

I had some Powerade at the 8km aid station then we continued to the half way point, it was pretty easy and we chatted about… RUNNING, would you believe. The crazy men that can run under 70 minutes were already flying back past us here and looking really determined. We continued to look as photogenic as ever in our bridal procession.

Me, Chan and Papa Smurf just past 8km’s. Photo by Yuliya Bozhko

The second half of the course after the tun around is always the best part! You know you’re over half way, and you get to see everyone on your way back and yell and wave at them because they are so happy to see that you have 7km’s to go and they have 14 🙂 I felt a bit tired here so had some raspberry Cliff Gel which stuck all over my fingers.

One more Powerade to wash this down, and a cup of water which I shoved my hand in to to get rid of raspberry residue and we were in to the final 5kms. For the first time in my life, the last 5km felt like a breeze. We saw another female up ahead and worked on passing her. We were easily holding 4min/kms with the tail wind and started to pass a few people. It’s such a great feeling to be doing negative splits, going faster in your second half being only a few km’s from the finish line.

I passed a guy running the marathon that I had seen doing the Tarawera, he always magically appears in that point of the race when you’re trying to find anything you have left to get you over the line as quickly as possible. ‘How are you doing?’ ‘Really good!’ Running up the final ramp I weaved through the 10km walkers and could see the giant digital clock in sight. 1.27.15 it said. I was stoked, better get across that line within the next 45 seconds so I can claim 1.27! I’m good at the sprint finish, I have a secret weapon for such intense moments, a giant vein on the right side of my temple. It comes out at key moments in my life, and only when cameras are involved.

What I loved about this race was seeing people I’ve met through my club, through the gym and those familiar faces you see on your regular runs, all out there giving it a go. I’m a lot more in tune with my body now than I was a year ago. I know how hard I can push myself, I know when I’m too tired, too thirsty, and if it’s my legs or my lungs that are fatigued.

Full results are here! Getting under 90 minutes with this race also means I get an Athletics New Zealand ranking, which is pretty cool. I look forward to chasing a faster time later this year and perhaps getting closer to 26.

WINNER! The prize was an expired Powerade, I was elated!

What I did right!

How I can improve for next time

P.S This race doubled as the NZ Half Marathon Championships. I came 13th female overall, and 8th in the Championship. The Scottish Senior women also took out the team competition.

3 thoughts on “NZ Half Marathon Championships”